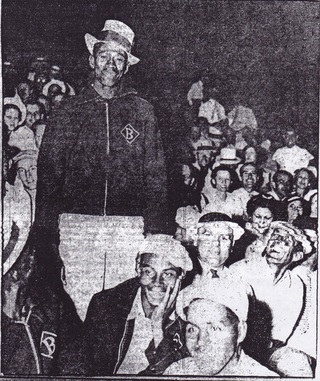 With Color Blind hitting bookstores this week, why not celebrate with a toast to Satchel Paige, star pitcher of the Bismarck, North Dakota baseball team that is the focus of the book? Paige starred for lots of team in the course of his peripatetic career; perhaps as many as 100. He took two sabbaticals from the Negro Leagues in order to go pitch in North Dakota. The first was for about six weeks in August-September 1933. The second was for the entire 1935 baseball season.

Unfortunately, the quality of the above photo was not good enough for it to be included in the book, but it's a rare memento. The picture was taken at a semipro tournment in Wichita, Kansas in 1935. Satch and a few Bismarck teammates were watching a game on their night off. The big man was stylin' that night in his team windbreaker and fedora.

That tournament plays a big role in Color Blind and Paige was the top draw of the 400-plus players on hand. Indeed, he remains one of sports epic characters...witness that fact that a ball he signed in Wichita sold at auction a few years ago for $6,000.


[Photo courtesy of The Wichita Eagle]

I was born and raised in North Dakota. I've always loved hearing stories about the old semi-pro and amateur teams, but I never knew that Satchel Paige himself played here! I cannot wait to read your book!