The March of Civilization 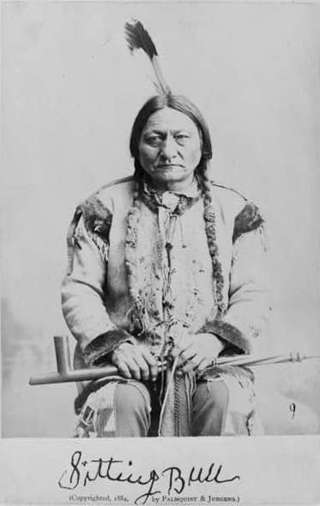 As far as anyone knows, Sitting Bull never played baseball. However, he killed his first buffalo at age ten so the man certainly wasn’t lacking in athletic ability. Color Blind is about the weave of baseball and history, the latter being where Sitting Bull fits into the story.

In the 1870s then-Lieutenant Colonel George Armstrong Custer and his dashing 7th Cavalry were stationed at Fort Abraham Lincoln. The fort occupied the west bank of the Missouri River about four miles south of the scrappy hamlet soon to be known as Bismarck. It was from there that Custer and 1,200 soldiers took their leave in the summer of 1876, riding off in a cloud of dust that ultimately carried them deep into Montana Territory near the Little Big Horn River - where a war party led by Sitting Bull and Crazy Horse was patiently waiting to spring a deadly trap.

In effect, Custer and Sitting Bull traded places. He was buried on the battlefield along with several hundred comrades. (In October, 1877 Custer's body was reinterred at the United States Military Academy at West Point.) Sitting Bull fled to Canada, but eventually wandered home, whereupon the U.S. government forced him and the remnants of his Lakota Nation to settle on newly-formed Standing Rock Indian Reservation, a vast holding pen that straddled what is now the border between North and South Dakota.

Sitting Bull soon was a familiar face in Bismarck. He often could be found sitting outside the Sheridan House, a combination hotel-train depot, basking in his notoriety and signing autographed photos for $1. In 1885 he left that perch to travel with Buffalo Bill Cody’s Wild West Show. He had been invited to join the cast by headline performer Annie Oakley. They’d met in Minneapolis the year before and became fast friends. In fact, Sitting Bull was so smitten with the tomboy sharpshooter that he referred to her as his daughter, calling her Watanya Cicilia, which meant "Little Sure Shot". He also gave Annie the moccasins he’d worn at the Battle of the Little Big Horn.

Buffalo Bill was no cheapskate. He reportedly paid Sitting Bull $50 a week (the equivalent of $1,190 in today’s dollars) to take a few laps on his horse at every show. But the old warrior grew bored making money and, come 1886, drifted back to Standing Rock Indian Reservation.

In those days Bismarck’s annual Fourth of July festivities began with a parade that served as the warm-up event for a raucous municipal baseball game, usually pitting the Bismarck team against their rivals from Mandan, the smaller sister city located directly across the Missouri River. Among the participants in the July Fourth parade of 1889 was none other than Sitting Bull, riding his horse and waving a banner that read “March of Civilization”.

He died a year later.

According to one celebrity auction website, nowadays a signed photograph of Sitting Bull "is worth more than $7,500".


[Sitting Bull photo courtesy of the Library of Congress]

Dunks, great blog. One note on Custer. My information is that he was exhumed and reburied at West Point. I think I saw his grave when I was 14 or so.

Maje: You are correct. Good catch. Custer's body was moved to West Point in 1877.