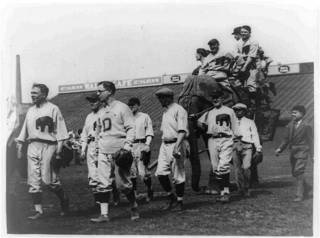 What to do with all the cool, surplus research material that doesn’t make it into a book? You can’t hold a garage sale. Answer: Start a blog!

So here we are. This will continue only as long as I have photo out-takes and tidbits worth sharing. There should be enough goodies to last at least until Color Blind is released on April 2nd.

Color Blind is the true story of an integrated, semipro baseball team based in North Dakota during the Depression. The book is not just a look back at racially charged times, however. It's also a look back at the bygone days of semipro and amateur baseball. Adult males practically had a civic duty to suit up and play ball. Hardball. Towns had teams. Companies had teams. Unions had teams.

Since I live within walking distance of the U.S. Capitol in Washington, D.C., I thought I’d begin with a hometown blog. Since 1909 members of the House of Representatives have held an annual “Congressional Baseball Game”. Republicans versus Democrats. Nowadays staffers join in, but originally the game was strictly the purview of sitting congressmen.

In the spirit of Sequestration Nation, let’s revisit the game played in early May 1926. You’ll see why.

I found photographs of both teams. The Republicans had the better game faces. Two players have their arms defiantly crossed. A third guy on the far left of the back row looks like a grizzled New York City cop, a cop who's a master at beating confessions out of suspects. (I’m guessing he was the Majority Whip.) The Democrats look soft in comparison, but I give them the edge in mellifluous names: Congressmen Jeremiah Edward O’Connell of Rhode Island, Heartsill Ragon of Arkansas, Thomas Jefferson Busby of Mississippi. They roll off the tongue.


The Congressional Baseball Game took place at Griffith Stadium, home of the Washington Senators. The Washington Post remarked, "To many Americans the baseball bat is mightier than the tongue; and in any event the exercise of another set of muscles will be beneficial to the habitues of the cloakrooms." Four thousand fans turned out. A handful of Republicans rode an elephant onto the field. The Democrats had a donkey in tow. The Army and Navy bands tootled in the background. Republican Speaker of the House Nicholas Longworth of Ohio threw out the ceremonial first pitch. I found a photo of him, too. He appears to short-arm the ball, as if flinging a dart. Don’t expect athletic prowess from a man who wears spats and carries a gold-topped cane.

Longworth’s strength was his genial nature and quick wit, traits that have fallen out of fashion in Washington. A colleague once spotted Longworth lounging in a chair at the Capitol and ran a hand over his bald head. “Nice and smooth,” he teased. “Feels just like my wife’s bottom.”

“Yes, so it does,” Longworth replied without missing a beat.

Humor apparently was in short supply that May afternoon in 1926. The Republicans jumped out to a seven run lead, only to have the Democrats come roaring back. The Dems were up 12 to 9 heading into the bottom of the seventh inning. That’s when the Republicans possibly tried to rally the good ol’ American way: by cheating. At one point West Virginia Congressman Charles Bachmann stepped to the plate. An eagle-eyed Democrat noticed that he was batting out of order, which could have been an honest, innocent mistake. On the other hand, Bachmann already had four hits in four times up, including two doubles.

A debate broke out right there at home plate. Congressmen argued back and forth, then jawed some more. Neither side gave an inch. It began raining invectives. No compromise could be reached. After fifteen minutes of deadlocked haggling, the umpire called the game and declared the Democrats victors.

Three years later the country went over the cliff known as the Great Depression. This is not to say that history will repeat itself. But it’s interesting to note that there have been only two Speakers of the House from the state of Ohio. Nicholas Longworth was the first. John Boehner is the second.

[photos courtesy of the Library of Congress]

The discount bin for thoughts of Tom Dunkel, a treat. It must be tough for a writer to see worthy musings chopped from his book, this is a good solution.
The politicians' teams of 1926 appear to have locked in their game. Will revelations of spitballs and weighted bats surface? How would the umpire have called it if SuperPacs were in the stands?
Senators, where are the long ball hitters? Does no one have a soul left to sell for one?

Is it true he was nicknamed "Zero ERA Longworth"?

Don: Far as I know, you are the only man in baseball history dubbed "Zero ERA". Of course, no need here to get into the business of you nicknaming yourself. :)